With an increasing demand for advanced industrial manufacturing, laser systems have become the most important fabrication tool. While high powered lasers such as CO2 lasers are used for coarse cuts of metals, ultrafast lasers are used for fine cuts and polishing of semiconductor materials. Fiber lasers have the versatility to do both. In today’s consumer electronics, electrification of vehicles and green energy are driving the need for advanced laser machining and additive machining of complex materials. This requires the use of a combination of laser types, sometimes running in parallel to accomplish coarse cutting, welding, fine cutting or polishing at high speeds.

A focused laser beam can generate a significant amount of heat. High-power industrial lasers can generate in excess of 10,000 Watts during operation of thick metals. Temperature control of the sensitive optics inside the laser needs to be maintained to achieve peak performance. Changes in temperature can distort the laser wavelength as it passes thru the optics, causing  inefficiencies that can result in poor welds or sputtering. Compressor-based refrigeration systems have long been used to cool laser systems while thermoelectric-based chillers or coolers offer spot cooling for low power lasers and optical components. This application note will focus on how thermoelectric coolers can be used for spot cooling of industrial laser optics. 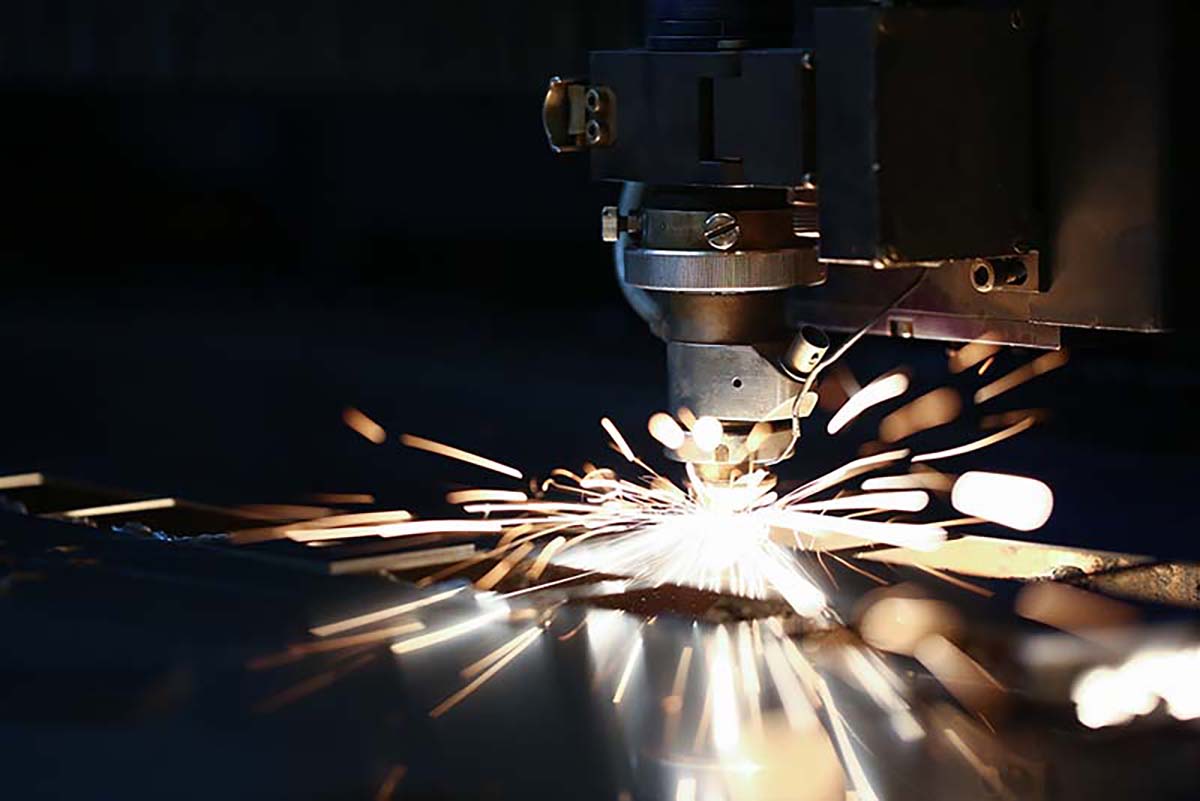 Laser systems are increasingly replacing CNC machines used in fabrication processes such as cutting, welding, drilling, and etching. Industrial manufacturers are looking for ways to reduce costs while increasing throughput and quality. Because laser systems are typically expensive, OEM’s need to justify the cost by reducing cutting or welding time, fabricating complex parts with unique pattern structures or producing parts with a high number of redundancies. In additive manufacturing, laser systems can create complex parts that cannot be made with CNC machines.

The main selection process for an industrial laser is based on the laser beam diameter and depth of cut it can achieve on the material the end user is processing.

Excimer lasers are growing in popularity due to the growth of OLEDs used in consumer electronics for handsets, laptops and TV’s. OLED screens can have more than 30 layers and require a laser for removing or anneal each layer. Demands for fiber lasers are also increasing due to their versatility. These lasers use hundreds of laser diodes, which provides the scalability to control the power of the laser beam. In addition, fiber lasers offer higher beam quality, efficiency and are more cost effective than traditional CO2 lasers.

Industrial lasers systems larger than 10 Watts typically require some kind of active cooling. Large systems (more than 500 W) typically require an external compressor-based chiller and smaller systems (less than 500W) normally use a thermoelectric-based chiller or thermoelectric coolers. Internal optical components also require temperature control to ensure optimal laser performance. Depending on the material of the optics, these components need to be kept at a nominal temperature between 20 to 35⁰C with a temperature stability of ± 0.5°C. In addition, thermoelectric coolers are installed inside laser diodes used in fiber lasers to keep the temperature of the laser diode stable while ambient temperatures fluctuate.

Future laser applications will bring new challenges to laser fabrication. They are expected to come from market applications in quantum technologies, printing of organs, lower cost manufacturing for customized single-piece processing and very large-scale processing. Some of these applications will require a more customized light control by tailoring the energy to the laser for improved energy deposition. New wavelengths will be required to improve process efficiencies, such as ultrashort high-power UV lasers and ultrashort far-infrared lasers. For high volume production, multiple beam processing will be required.

As a laser beam’s energy passes thru an optic lens it can increase its temperature and distort the wavelength of the laser beam. Thermoelectrics are often used to absorb the heat from the laser beam as it passes thru the lens and pump it out to the hot side heat exchanger. The cooling capacity of the thermoelectric cooler needs to exceed the energy being absorbed by the lens plus parasitic heat losses caused by thermal shorting. The heat is then rejected by the thermoelectric cooler and dissipated by a heat exchanger. This can be either a direct conduction path to the case or for higher heat loads, a cold plate heat exchanger. When the lens temperature is stable, the cooling power requirement is typically low.

Thermoelectric coolers can be mounted onto the side of the lens or the fixture holding the lens. To maximize thermal conductivity, thermal interface material should be used on either side of the module during assembly. However, standard thermal interface materials, such as greases can outgas and contaminate the lens. Special thermal epoxies and phase change materials with low outgassing characteristics can be used, but to make sure all outgassing has been released, they need to be baked in oven prior to installation. An alternative mounting method is to specify thermoelectric coolers with metallized surfaces and low temperature solder. In this case, InSn solder is typically used, which melts at a temperature below the solder construction of the thermoelectric cooler. The difficulty with soldering is to minimize flux residue as this can also outgas and contaminate the lens.

It is also important to protect laser electronics against condensation. Even for applications where the set point temperature is at 20⁰C, the cold side of the the thermoelectric cooler can be at 10⁰C or colder to maintain that set point temperature. This will most likely be below the due point temperature and cause moisture in the air to condense. Sealing the perimeter of the thermoelectric cooler with epoxy or RTV is not sufficient and it is therefore recommended to have a second insulation barrier to protect the thermoelectric cooler cavity. All surfaces that go below dew point will require some type of insulation to keep moisture from condensing. This is usually a close cell foam or other type of insulation that does not absorb moisture and has good thermal insulating properties.

Thermoelectric coolers can also be used in dehumidification applications in high power lasers. For these applications large recirculating chillers are used to absorb heat generated by the laser and power supplies that power the laser. However, in high relative humidity environments it is possible for moisture to condense onto cold plate surfaces, which can cause a field failure to the power supply. To minimize this risk, a thermoelectric cooler assembly can be used to lower the relative humidity inside the laser. The cold side heat sink will condense the moisture in the air and route it away from the power supply and other optoelectronics inside the laser.

The largest model in the UltraTEC UTX Series has a heat pumping capacity of up to 296 Watts. Form factors can range from 25 x 25 mm’s up to 55 x 55 mm’s. The solid-state UTX Series thermoelectric cooler generates a lot of heat in a small area. For the larger heat pumping models, it is recommended to use a liquid heat exchanger on the hot side to dissipate heat into the surrounding environment.

More information on the UltraTEC UTX Series can be found by visiting lairdthermal.com/utx-series