Maintaining a temperature well below ambient, and monitoring this temperature carefully, are critical to extending the shelf life of reagents used for in vitro diagnostics. Most reagents require refrigeration and would spoil within hours at room temperatures. Reagents can degrade and become contaminated by microbial growth, which can affect test integrity results. Reagents can also be negatively impacted if they undergo too many freeze and thaw cycles. 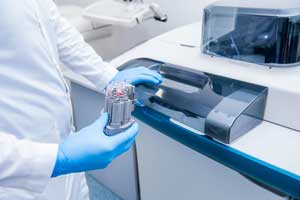 Reagents are used in in vitro diagnostics either to cause a reaction or to determine if a reaction has occurred. They perform similar functions in a variety of applications. In organic chemistry, for example, a reagent can be added to cause a transformation in the starting substance. In clincal chemistry, reagents can be used to measure the concentration of a substance to detect the presence or absence of a particular material, or to test if a specific reaction occurs. Reagents can be employed to identify and measure a target substance by laboratory and medical technicians. In biotechnology, reagents have been used to identify and manipulate chemical matter in cells.

These reagents all share a common characteristic – they have a narrow temperature range for safe storage, which requires precise temperature control. Especially for those reagents used in biotechnology, this temperature control requires the usage of refrigeration. Precise thermal management control below ambient reduces reagent replacement costs and ensures the accuracy and reliability of laboratory test. The wide variety of reagents used in chemical and biological processes reacts differently to storage temperature. The storage systems needed for laboratory and medical reagents have different requirements depending on the specific reagent and storage time. These storage systems are generally classified into three types based on temperature range control:

Refrigerated temperatures, which range from 2ºC to 8ºC, provide a short-term storage solution for frequently used biological reagents including enzymes and antibodies. When reagent samples are stored within this temperature range, minor temperature swings can be tolerated. However, some reagents can only handle a few of these minor temperature swings before starting to break down. Advanced storage refrigerators using thermoelectric cooler assemblies are able to offer precise temperature control, accurate to within ±0.5ºC under steady-state conditions.

In addition, it is best to test reagents at body temperature to achieve the most accurate test results. Because thermoelectric coolers have the ability to both heat and cool, they can also be used to heat reagents to body temperature prior to dispensing into patient sample for testing.

There are many challenges with designing sample storage solutions for reagent cooling in addition to precise temperature control. One such challenge is the SWaP (size, weight and power) requirement. Other challenges include mitigating condensation that can build up on cold surfaces, managing airflow within the chamber and reducing noise level. Meeting all of these requirements without the use of restricted refrigerants in compressor-based systems can constrain the thermal design engineer.

The trend to miniaturize medical diagnostic equipment and free up lab space includes reducing the overall size of the in vitro diagnostic system and packing more electronics into closer proximity to one another. The thermoelectric cooler must have a compact form factor to accommodate the densification of medical electronics. Waste heat must be managed and routed efficiently in order to increase performance of the cooling unit, reduce its power consumption and provide quieter operation. Thermoelectric cooler assemblies offer a compact form factor due to their small size and DC operation.

Thermoelectric cooler assemblies are offered in Air-to-Air, Direct-to-Air or Liquid-to-Air heat transfer mechanisms. Each heat transfer mechanism has its pros and cons. Air-to-Air units are good at circulating air to minimizing temperature gradient within a sample storage compartment, however if there is an opening to ambient due to dispensing for example, outside moisture can get into the chamber and condense. Direct-to-Air units can reduce this air exchange from occurring by mounting it to the exterior of the chamber wall. No airflow occurs on cold side since cooling is absorbed by conduction only. If the instrument has no room for a localized cooling unit, then it is advantageous to use a Liquid-to-Air unit. In this case the cooling unit can be mounted at a location where space is available and coolant is circulated to the chamber to control its temperature.

The installation location and mounting orientation of the thermal management solution are important to consider. Compressor-based systems are larger and must mount vertically for proper operation. Sometimes cooling units need to be located far away from the chamber resulting in bigger diagnostic systems with complex ducting to ventilate the air to and from the chamber. This is not the case with thermoelectric cooler assemblies since they are smaller and can be mounted in multiple orientations. The mounting orientation also accommodates more airflow options as paths for incoming air at inlet and exhaust of air to outlet must be considered to maximize the cooling performance.

Faced with global warming, many governments, particularly those in Europe, have environmental restrictions on hazardous refrigerants that deplete the ozone layer. Older compressor-based systems that utilized HFC refrigerants including R134a and R404A are being phased out for environmentally friendly refrigerants. These modern cooling units use a variety of natural refrigerants, including R744 (carbon dioxide), R717 (ammonia), R290 (propane), R600a (isobutene), and R1270 (propylene). However, natural refrigerants can create challenges of increased pressure, high toxicity, flammability & asphyxiation. Thermoelectric cooler assemblies bypass this government restriction as they do not use refrigerants, which is good for long term life cycles of the instrument.

The challenges of precise thermal control, size limitations, reduced power consumption and noise levels, airflow constraints, condensation prevention, the need for temperature alarms and the restrictions on using CFCs has led many manufacturers to seek alternative methods of temperature control, such as thermoelectric cooler assemblies.

Thermoelectric cooler assemblies are cooling systems that utilize thermoelectric coolers with integrated temperature controllers to remove heat by convection, conduction or liquid means, depending on the specific application. They are an ideal option for cooling reagent storage chambers because passive cooling technologies such as conventional fan trays cannot bring the temperature below ambient. In addition, compressor-based systems can face government restrictions based on the type of refrigerant used, which may make it challenging to comply to a product with a long life cycle.

The SuperCool Series of thermoelectric cooler assemblies is specifically designed to provide precise temperature control for chambers, such as those used for reagent storage compartments in analytical testing and medical diagnostics, in indoor lab environments. The SuperCool Series features a unique patented design that offers a high performance hot side heat sink which dissipates heat more quickly and more efficiently than competing heat exchanger technologies, enhancing the cooling performance up to 90%. The units operate on 24 VDC and deliver heat pumping capacities of 110 to 407 W of cooling power. They are available in Air-to-Air, Direct-to-Air and Liquid-to-Air versions. Their smaller form factor design utilizes custom thermoelectric coolers to maximize cooling capacity and premium grade fans to minimize noise, while superior moisture-resistant insulation prevents condensation from penetrating into the chamber cavity. 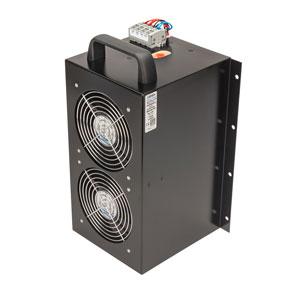 The SuperCool Series thermoelectric cooler assemblies ranges from 110 to 407 W and is offered in Air-to-Air, Direct-to-Air and Liquid-to-Air versions.

Designed to control the temperature of a liquid circulating loop used in medium to large medical storage chambers, the SuperCool Series SLA-400 offers the highest cooling capacity in the industry for its size. The advantage of liquid-to-air units, such as SLA-400, is that it can be mounted where space is available. This is typically away from the center of the diagnostic instrument where temperatures increase due to surrounding electronics and limited air supply. This frees up space for electronics or double stacking of chambers, resulting in a more compact diagnostic system with maximum cooling capacity. 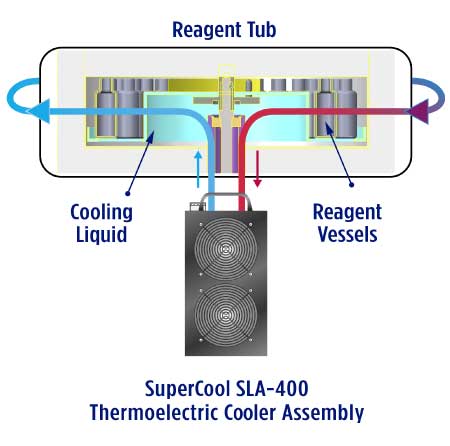 Liquid-to-Air units such as SLA-400 allows for double stacking of chambers
resulting in a more compact diagnostic system.

The PowerCool Series is designed for indoor use in the medical, analytical and industrial markets. These thermoelectric cooler assemblies offer the widest selection of cooling capacities, ranging from 20 to 280 W. They are available in air-to-air and direct-to-air versions that use impingement flow to dissipate heat on the hot side. The air-to-air assemblies cool objects via convection, where the heat is absorbed and dissipated by heat exchangers equipped with fans and ducted shrouds. 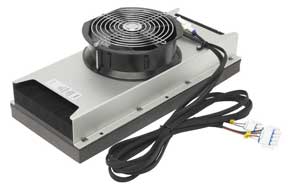 The PowerCool Series is offered in air-to-air and direct-to-air versions, ranging from 20 to 280 W.

The Tunnel Series of thermoelectric cooler assemblies is also designed for medical diagnostic equipment and analytical instrumentation. It uses a patented, high performance cross flow technology that maximizes heat transfer when pulling air through a heat exchanger. This cross flow technology reduces the number of required airflow paths when compared to traditional impingement flow assemblies. The heat pumping action is generated by thermoelectric coolers, which are custom designed to achieve a high coefficient of performance to minimize power consumption. The smaller form factor Tunnel Series offers cooling capacities exceeding 100W to support a wide range of cooling applications. The Tunnel Series is offered in 12 or 24 VDC configurations and can cool by either convection (air-to-air) or conduction (direct-to-air) means. 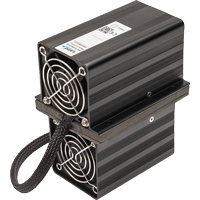 The Tunnel Series thermoelectric cooler assemblies offers a cooling capacity from 10 to 100 Watts and is available in air-to-air and direct-to air. 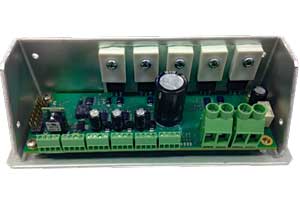 More information on the SuperCool Series can be found by visiting
https://www.lairdthermal.com/products/product-series/supercool-series

More information on the PowerCool Series can be found at
https://www.lairdthermal.com/products/product-series/power-cool-series

More information on the Tunnel Series can be found at
https://www.lairdthermal.com/products/product-series/tunnel-series 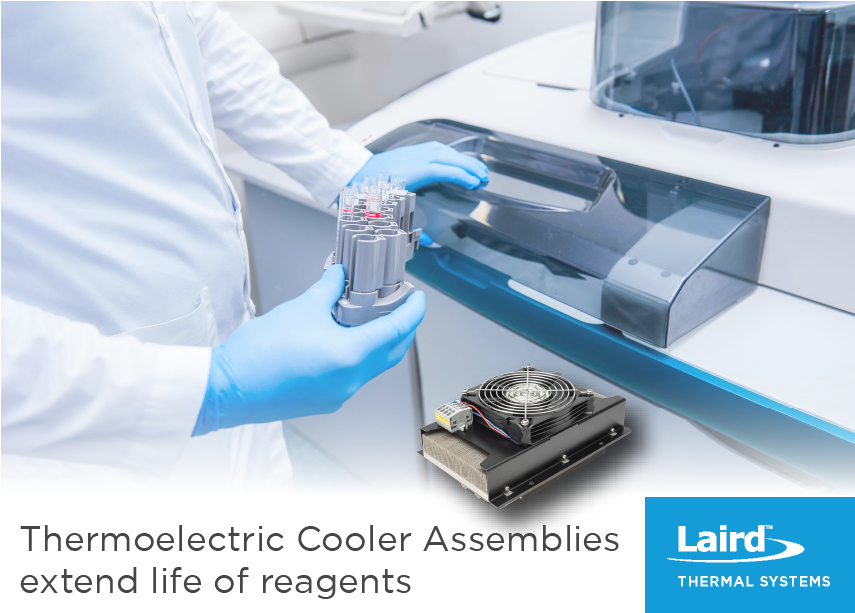