Laser projectors used for entertainment applications utilize laser modules to generate 4K-resolution images with a robust color palette and up to 75,000 lumens. While commercial laser projector systems quickly have evolved to be more energy-efficient, these systems still require up to 6kW to generate bright, high-resolution images. This is needed to project in cinemas and large venues at stadiums. Consequently, the high-power laser systems generate a significant amount of heat during operation. Heat can degrade the sensitive laser components, including the laser module (laser diodes and laser optics), optical scanning system, and laser diode driver electronics. These systems need stable temperature control to ensure proper functionality, long life operation and crisp image projection. Efforts to increase luminance and color palette resolution while maintaining the size of a laser projector have led to significant thermal challenges for many manufacturers. Depending on the type of laser projector, temperature control can be maintained by a recirculating chiller or an ambient liquid cooling system with a thermoelectric cooler. 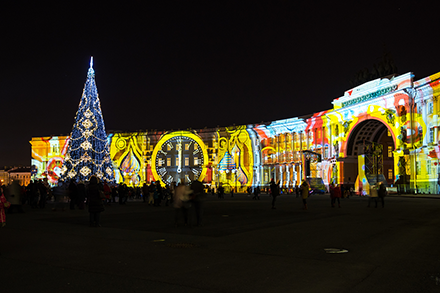 A commercial laser diode projector used in cinemas or light-shows at concerts generally consists of one or more lasers — red, green, and blue — that are combined with an optical scanning system and various drive electronics, all integrated into a laser housing. Compared to traditional lamp projectors, laser projectors provide a wider range of colors, a sharper contrast and can project at further distances. Laser projectors can deliver exceptional image quality with outstanding 2D and 3D brightness, high contrast, uniformity, and superior color performance.

A laser light source is more energy-efficient than conventional lamps because the laser output can be precisely tuned to produce the required red, green, and blue wavelengths rather than wasting power on unusable frequencies. In addition, the laser has longer life expectancy with replacements after 20,000 hours, which is more than twice the lifetime of projection lamps. Compared with traditional lamp projectors, laser projector start-up is virtually instant with consistent brightness maintained over its working life.

Laser diode technology has become the standard for projector laser modules because of the reliability and long life operation. Laser diode technology applies an electrical current to a laser diode, which is then passed through a laser crystal to create laser light. Providing sufficient cooling for the light source (and other elements of the projector’s light engine) starts with the projector manufacturer providing a good thermal design to ensure the heat produced by the lamp is adequately vented away from the projector’s light engine. The lasers used in laser projection systems can generate heat between 100 and 300 Watts.

As mentioned, laser projector systems can use either a recirculating chiller or an ambient cooling system with a thermoelectric cooler to provide thermal stability of around 20°C to 30⁰C. Market leaders tend to use ambient liquid systems featuring a thermoelectric cooler because they are less complicated, more cost-effective and reliable.

OEMs can experience a variety of thermal challenges when designing commercial laser projector systems. They include achieving the desired temperature set point and heat pumping capacity while minimizing outgassing. Space constraints such as size, weight and power (SWaP) also need to be taken into consideration.

Lasers inherently produce heat during operation, which must be dissipated efficiently to ensure high-quality image resolution. Laser projection manufacturers continue to use higher-powered laser systems to enhance illumination and the color palette, which generates more thermal noise. Combine this with the trend toward miniaturization for improved portability and simplified installation and managing the heat flux density becomes even more challenging. Smaller thermal systems must deliver higher heat-pumping capacities to meet these design complexities.

Space constraints can also impact airflow negatively, resulting in degraded performance of thermal management solutions such as heat exchangers. More airflow ensures proper heat dissipation. Location of temperature sensors play an important role in thermal management accuracy. Ideally, the sensor should be located as close to the laser as possible to ensure precise temperature control. However, because space is limited the thermistor (sensor) may be located on the cold block that mates to the laser. The thermal resistance between the thermistor and laser may result in delayed temperature feedback response.

Sensitive optoelectronic components are negatively affected by condensation. Moisture forms on cold surfaces as the temperature drops below the dew point. If this moisture seeps into the electronics, it can cause the electronics to fail. It is therefore important to protect electronics against condensation, even for applications where the set point temperature is at 20⁰C. To maintain that temperature set point, the cold side ceramic of the thermoelectric cooler can be at 10⁰C or colder. This will most likely be below the due point and cause moisture in air to condense. Because epoxy or RTV sealant of the thermoelectric cooler is not enough, it is recommended to have a secondary insulation barrier to protect TEM cavity. All surfaces that go below dew point will require some type of insulation to keep moisture from condensing. This is usually done by insulating with a closed cell foam or other type of insulation that does not absorb moisture, has good thermal insulating properties and do not outgass.

Outgassing can also affect image quality by coating the light source or optics in the laser system. It is recommended to use a thermal interface material on either side of the thermoelectric cooler during assembly to maximize thermal conductivity. However, standard thermal interface materials, such as greases can outgas and contaminate the lens. Special thermal epoxies and phase change materials exist with low outgassing characteristics. However these should be baked in oven first to make sure all outgassing has been released prior to installation. An alternative mounting method is to specify thermoelectric coolers with metallized exteriors and a low temperature solder. In this case InSn solder is typically used, which melts at a temperature below the solder construction of the thermoelectric cooler. The one concern with soldering is to minimize flux residue as this can also outgas and contaminate the lens.

For temperature stabilization of smaller footprints, generally less than 100 x 100 mm, thermoelectric coolers are often mounted directly onto the exterior of the laser. Thermoelectric coolers for laser cooling often have high heat pumping capacity, typically up to 13 Watts per cm2  to match the heat generated by the laser. Thermoelectric coolers operating at these high heat pumping levels often exceed the ability of a heat sink and fan to dissipate heat into the surrounding environment. An ambient liquid cooling system and a cold plate is a better option that can minimize space constraints at the source, while routing heat out to an area where there is more space to exhaust heat into the ambient environment.

Two methods commonly used to cool projection laser systems are compressor-based refrigeration systems like chillers and an ambient liquid loop system that utilizes a thermoelectric cooler. Both systems have the ability to cool well below ambient temperatures, unlike liquid-to-air heat exchangers.

Ambient liquid loops, on the other hand, use thermoelectric devices for precise spot-cooling. Through the Peltier effect, thermoelectric coolers have a high heat-pumping capability up to 296W with a maximum temperature differential (ΔT) of 72°C to maintain stable temperatures of sensitive electronics below their maximum operating temperature. In this application, a large amount of heat travels through a very small space. The thermoelectric coolers typically used are 25x25, 30x30 or 52x52 millimeters.

The largest model in the UltraTEC UTX Series thermoelectric cooler family has a heat pumping capacity of up to 296 Watts. Form factors can range from 25 x 25 mm’s up to 55 x 55 mm’s. The solid-state UTX Series thermoelectric cooler generates a lot of heat in a small area and is ideal for spot cooling in laser projection applications. For the larger heat pumping models, it is recommended to use a liquid heat exchanger on the hot side to dissipate heat into the surrounding environment.
The UltraTEC UTX Series platform cools well below ambient temperature and actively moves heat away from sensitive electronics. With no moving parts, solid-state Peltier coolers significantly reduce maintenance and total ownership costs. Peltier coolers offer high reliability, no operational noise levels and perform well in high-vibration applications. 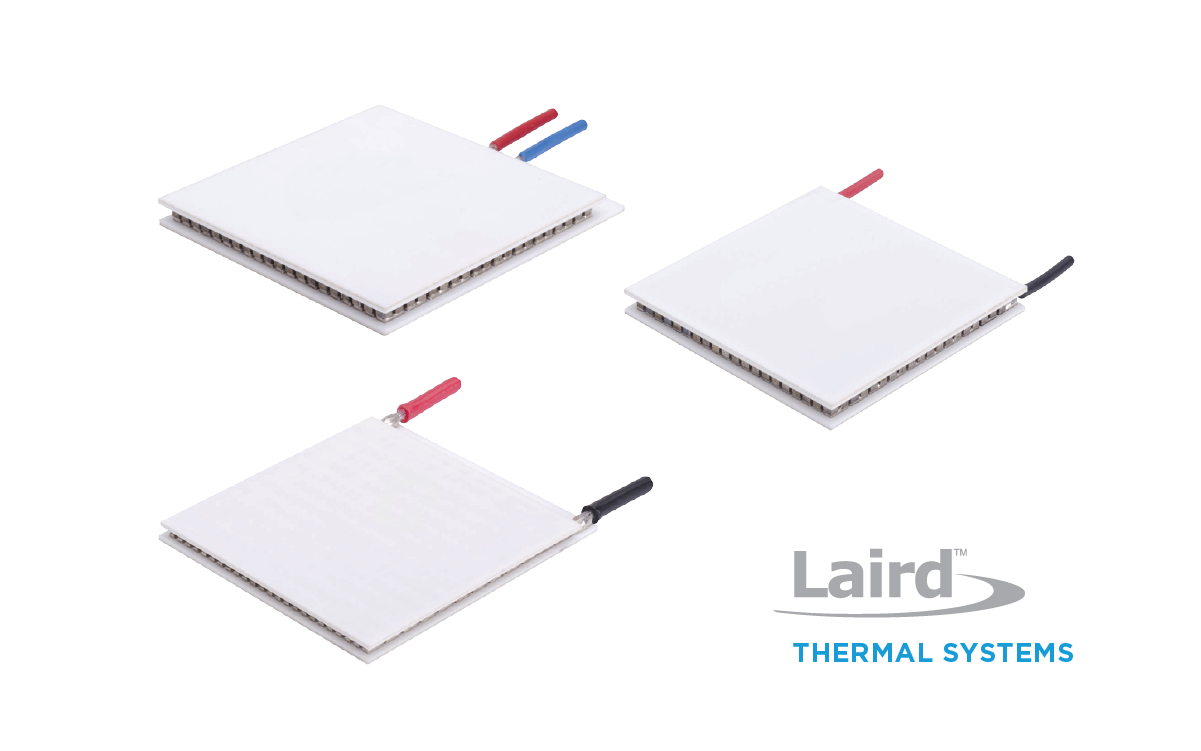 Stabilizing the operational temperature of laser optical components is vital to the performance of high-power laser projectors for cinema and light shows. Power densities continue to increase, improving illumination and color palette, while projector frame continue to shrink, improving portability and installation options. Modern cooling technologies are now more advanced to support these design demands. Not only can chillers provide a solution for many projectors, but ambient liquid systems with thermoelectric devices offer simplified spot-cooling to provide superior temperature stabilization that maintains peak performance of laser.

More information on the UltraTEC UTX Series SuperCool Series can be found by visiting lairdthermal.com/utx-series 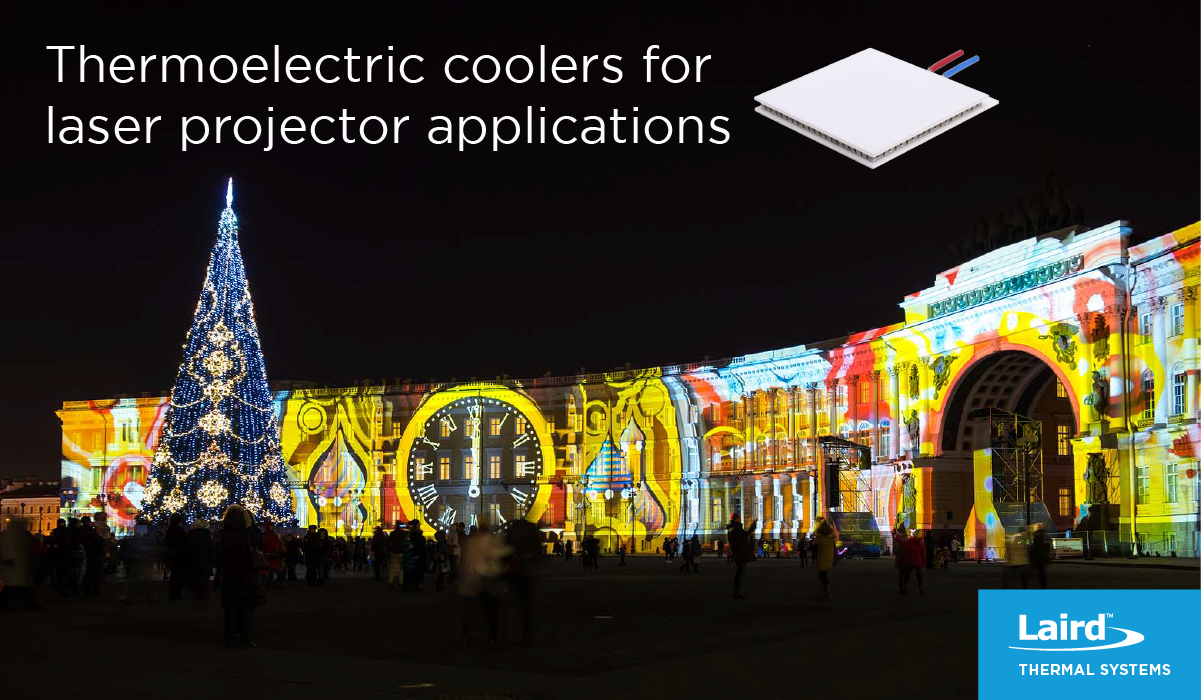