Here we compare and contrast two cooling technologies. Comparisons of efficiency, reliability, control, as well as installation and maintenance, demonstrate that a thermoelectric based solution can have significant advantages over conventional compressor based systems.

Technology Comparison – How it Works 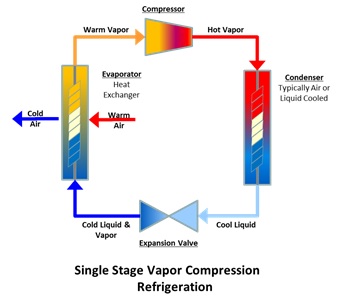 A conventional compressor based system (shown above) contains three fundamental parts: 1) the evaporator, 2) the compressor; 3) the condenser. The evaporator (cold section) is where the pressurized refrigerant passes through the expansion valve and expands, boils, and evaporates.  During this change of state from liquid to gas, energy (heat) is absorbed. The compressor acts as the refrigerant pump and recompresses the gas into a liquid.  The condenser expels both the heat absorbed at the evaporator and the heat produced during compression into the ambient environment.

A thermoelectric-based system is comprised of both p- and n- type materials brought in contact to form a junction. When the device in connected to a battery or other power source electrons will flow. At the cold junction, energy (heat) is absorbed by electrons and moves from a low-energy state in the p-type semiconductor element, to a higher energy state in the n-type semiconductor element. The battery provides the energy to move the electrons through the system. At the hot junction, energy is expelled to a heat exchanger as electrons move from a high-energy level to a lower energy level. Reversing the direction of current flow reverses the heat pumping direction.  This allows the thermoelectric device to provide both cooling and heating with a simple reversal of the current.

Thermoelectric coolers are solid-state devices having no moving parts, fluids or gasses. The basic laws of thermodynamics apply to these devices just as they do to conventional heat pumps, absorption refrigerators, and other devices involving the transfer of heat energy.

Thermoelectrics operate on DC power. These can be configured to run on a variety of DC voltages by selecting a series or parallel configuration of the internal construction of a thermoelectric cooler. The most common voltages are 24 and 48 VDC. Since they require DC, a power supply is often used to convert AC to DC.

Various line power levels in geographic regions require AC compressors and fans to run on specific voltages and frequencies. This increases the number of components required to support each region and makes the unit susceptible to the possibility of brown-outs. Power supplies, however, can operate on a universal range of input voltages and frequencies. This enables the cooling system to run efficiently in geographic areas that have limited reliable output power and can maintain operation of a thermoelectric cooler during a brown-out (low voltage condition).

Conventional compressor-based air conditioners are typically AC powered. Today’s compressors are more efficient than a decade ago. In steady-state operation at maximum designed heat loads, they can be the most energy efficient choice. Under this condition, a well-designed compressor based system will use 30% to 35% less power than the equivalent thermoelectric system.

Many enclosure applications, especially those in remote or outdoor environments, have environmental conditions that fluctuate throughout the day and over the course of a season. Compressor systems are either entirely “ON” or “OFF”. There is no proportional control, so full power must be applied at all times.  Furthermore, the start-up current for a compressor system is often three times the steady state operating current and the circuit must be sized to handle it. Combining the non-proportionality, repeated ON-OFF control with the high-power draw at start-up and those efficiency gains at steady-state are reduced.

Thermal management of an enclosure is necessary to extend the reliability and maintain optimal performance of electronics. Therefore, it is critical that the most reliable climate controlled technology be applied.

A thermoelectric cooler is a solid-state device. There is no compressor, motor or refrigerants involved. The only moving parts are the hot side and cold side fans for circulation of heat absorption in the cabinet and heat dissipation to environment. While these fans are rated for up to 70,000 hours, they can also be controlled at lower speeds to extend life.

Thermoelectric coolers with a Proportional Integral Derivative (PID) controller, can achieve more than 70,000 hours of operation. With an integrated PID controller, the thermoelectric cooler does not suffer from stresses induced by the stop-start power surges or temperature overshoot variations. Therefore, the higher reliability of steady-state conditions are maintained.

The compressor based system relies on moving parts and coolants for operation. Both the compressor and motor are required to move the working fluid through the system, while fans are used to circulate the air through the evaporator. A compressor system’s components will wear out over time due to friction, thermal expansion, and on-off control. Friction wear is a constant problem in this system and exacerbated by temperature fluctuations in the environment and control side. Additionally, leakage of the refrigerant can occur through seals that fatigue from continuous operation. This loss of refrigerant will degrade performance and stop protecting critical electronics.

A thermoelectric cooler assembly has no working refrigerants and can be shipped, handled, and mounted in any orientation without affecting its performance or reliability. This not only simplifies the method of shipping, but offers options to orient the unit to maximize circulation. A single thermoelectric cooler assembly design can be top-, wall- or door-mounted in either vertical or horizontal direction and one model can satisfy multiple orientation installation choices. Gravity will only affect the orientation if the application reaches dew point because condensation routing methods will be gravity-dependent and must be considered in the design.

A thermoelectric cooler assembly is smaller, requiring less surface area for mounting and overall volume, than a compressor-based system when capacities are less than 500W (1700 BTU). Typical size and weight savings can range from 25% to 50%.

Because of the refrigerant, a compressor-based system must be kept in a specific orientation during shipping, handling, and installation or damage to the system may occur. Compressors also tend to be heavier and are larger than comparable thermoelectric based systems. This requires mounting surfaces and possibly multiple technicians needed for installation. A compressor-based system cannot accommodate multiple mounting orientations, so a special unit is required for top mount, front mount installation. This requires more models to carry in inventory.

Vibration has a cumulative effect of loosening hardware connection of the cooling unit, as well as the electronics within the enclosure. The thermoelectric cooler assembly operates silently with minimal to no vibration. The only vibration comes from the DC fans, which are vibration damped with rubberized fasteners. The thermoelectric cooler assemblies do not contribute to loose hardware or other vibration issues that can occur from long term operation. A compressor-based system has several moving parts, which cycle and vibrate constantly when powered on. This contributes to an overall higher noise level and vibration, which can be detrimental to the system level electronics housed within the enclosure.

The temperature control specification for an electronics enclosure is typically +/- 2°C or greater. This allows hysteresis to be designed in, reducing cycling between cooling and heating or on/off when the enclosure is at its set point temperature. This range is suitable for thermostatic control, but a tighter tolerance requires a proportional type of control.

A thermoelectric based controller can drive the temperature of an enclosure to within 0.5°C of the set point temperature. This is accomplished with the integrated bi-directional PID control, adjusting the net power to the thermoelectric cooler allowing fine tuning and rapid response to component or environmentally-induced heat load fluctuations.  The operating range for a typically thermoelectric cooler is -40°C to +65°C for most systems.

Compressor-based systems are typically designed for operation between 20°C and 55°C. This range is useful for most enclosure applications and operating environments. If heating is required, a separate heater and switching circuit must be used or if higher or lower temperatures are desired, a special compressor for that range (refrigerant, hardware) must be designed.

The graph below compares the cooling capacity of a thermoelectric cooler assembly to a compressor based air conditioner from a manufacturer’s datasheet. The initial interpretation is that the compressor appears to have more cooling power than a thermoelectric cooler assembly (260W v. 250W) under a DT= 0°C in an ambient of ~ 50°C. However, in actual application conditions (DT= 20°C), the two units’ cooling capacities are similar (140W v 138W). 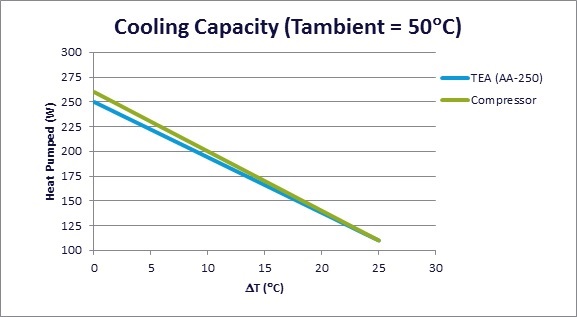 For reliability and maximizing useful life, the batteries require temperature control from an ambient environment that can fluctuate above and below battery temperature limits.

In this application, a bank of batteries within a cabinet requires temperature control to extend the life, so they can be used during emergency power outages.  The ambient temperature can range from a high of +50°C to a low of -33°C.  The enclosure must be kept between +10°C and +30°C during these environmental conditions for battery protection.

This comparison demonstrates the performance and efficiency of the best matched, commercially available thermoelectric and compressor-based models.  The data used in this study comes from both manufacturers’ data sheets and modeling software; power usage was confirmed with manufacturers’ representatives. The rate of heat leaking into and out of the cabinet is determined by the surface area and insulation value. In this comparison, the heat leak rate was 5W/°C.

For example, a 20°C temperature difference between the ambient and internal temperature results in a 100W heat loss/gain (20°C x 5W/°C = 100W).  The cooling and heating solution must offset these losses or gains.

Heating Mode: Demonstrates the power usage required to maintain the enclosure temperature to specification (+10°C).  Data compensates for the 20W active load within the cabinet.

The tables and graphs in the pdf version of this paper provide the measured efficiencies under a range of environmental temperatures.

A thermoelectric cooler assembly has considerable advantages over a comparably-sized, compressor-based solution in climate-controlled electronic enclosures. It can both cool and heat, offering more precise temperature control than a compressor-based unit and is more energy efficient throughout the temperature range of the application, by 25% to over 90% in cooling mode and up to 400% in heating mode.

The thermoelectric cooler assemblies solid-state construction provides advantages in reliability, installation, vibration, and low cost of maintenance. Additionally, its compact form factor and lighter weight allows for easier installation and occupies less space than a compressor-based unit. The unit operates on DC power. This makes it much easier to utilize globally regardless of the available AC line voltage and frequency. 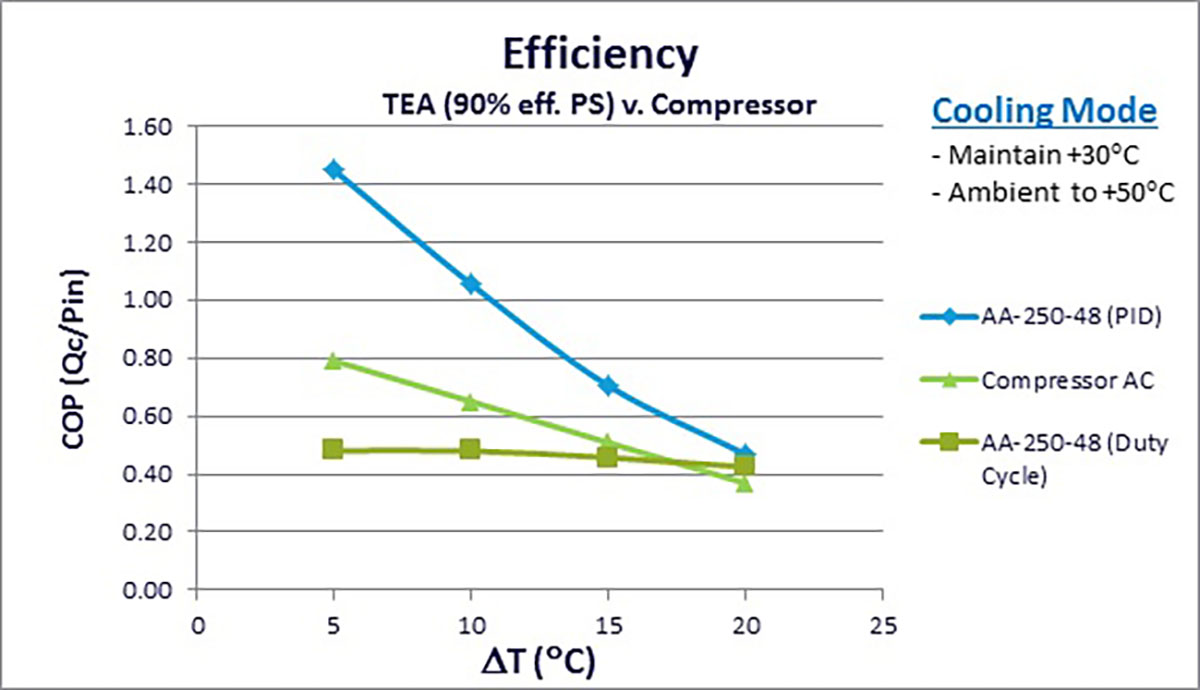