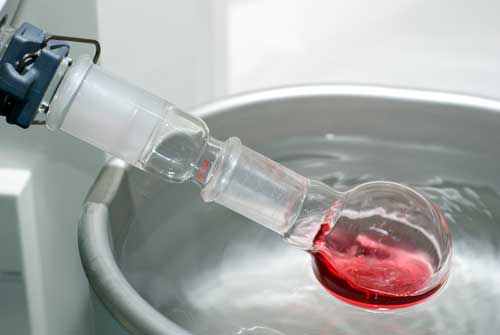 Laboratory cooling baths are used to maintain below ambient temperatures of liquid mixtures, for example when collecting liquids after distillation or conducting chemical reactions with substances that require refrigeration or freezing. A cooling bath typically consists of a substance with high thermal conductivity mixed with either a solid material that melts at low temperatures or liquid with a low boiling point. While an ice/water mixture is the simplest and easiest type of cooling bath, dry ice or nitrogen are required for cooling below zero Celsius.

Cooling baths often need to maintain precise temperature control for a period of time as temperature fluctuations can influence the interaction between the components. Recirculating chillers are often the preferred thermal management solution due to their ability to cool well below ambient temperatures and remove a large amount of heat quickly.

Offering cooling down to minus 5°C degrees with a temperature accuracy of ±0.05°C, the NRC400 is ideal for bath cooling applications. Utilizing custom thermoelectric coolers with premium thermoelectric materials, it delivers a higher coefficient of performance (COP) compared to previous models.