Polymerase chain reaction (PCR) is a technique used in molecular diagnostics to amplify sequencing of DNA. Also referred to as molecular photocopying, the DNA produced by PCR is vital to many laboratory and clinical procedures. PCR testing has been instrumental in the diagnosis of SARS-CoV-2, better known as COVID-19. Not only do PCR tests detect the presence of a virus during testing but it will also detect fragments of a virus even after the patient is no longer infected. The PCR test is considered the “gold standard” test for diagnosing COVID-19 because it is the most accurate and reliable test around. PCR’s impact on detecting infectious diseases is predicted to become standard in our daily lives. 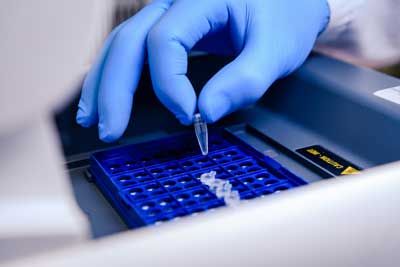 PCR is considered the most accurate and reliable testing method for diagnosing infectious diseases.

There are three main types of PCR machines: traditional, real-time and quantitative. Traditional PCR machines designed in the 90’s provide poor accuracy and low sensitivity and results are obtained after testing. Real-time PCR allows technicians to view results while testing is in process, providing the most precise and accurate data for quantitation. Real-time PCR enables medical staff to offer point of care (POC) testing, delivering results to patients within minutes instead of hours. POC testing ensures patients receive the most effective and efficient medical care when and where it is needed. Real-time PCR testing saves time because technicians can optimize melt temperature during the pre-trial run. Quantitative PCR, also known as Digital PCR provides an exact count on rare folds which allows for deeper analysis than what can be detected with Real-time PCR.

PCR is enabled by a machine called a thermocycler, which is programmed to rapidly alter the temperature of the reaction every 30 to 60 seconds to allow DNA denaturing and synthesis. Technological advancements have enabled thermocyclers to decrease in size over the years to save valuable laboratory bench space. Modern thermocyclers used for real-time and digital PCR testing utilize thermoelectric technology to precisely manage the set point temperatures and ramp rates. Thermal cycling can create a harsh environment that degrades standard thermoelectric coolers due to the mechanical stresses that occur during the heating and cooling cycle. Laird Thermal Systems has developed a next-generation thermoelectric cooler, the PowerCycling PCX Series, that combines advanced thermoelectric materials with enhanced proprietary process controls to provide optimal performance and a robust construction for thermal cycling applications. 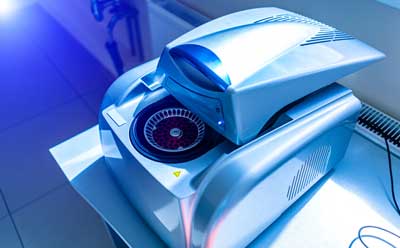 PCR requires a high number of thermal cycles to create millions of strands of DNA sequencing to be used for diagnosis. In a thermocycler, samples are prepped and dispensed into a 96 or 384 well cartridge and precisely temperature controlled during each temperature stage.

Typically, PCR consists of a series of 20 to 40 repeated temperature cycles, each time doubling the DNA copies. In approximately 40 cycles, about 1 billion DNA copies can be created to generate enough biomarkers that it can be identified by the optical measurement system with high accuracy. The cycling is often preceded by a single temperature step at a high temperature (95°C), which separates the DNA, followed by cool down to a melt temperature between 50 to 65°C where the biomarkers will bond to the DNA. The third stage increases the temperature to 72°C so a copy of the DNA can be sequenced. The set point temperatures and length of time that are applied to each stage depends on a variety of parameters based on how well the biomarkers attach to the DNA. 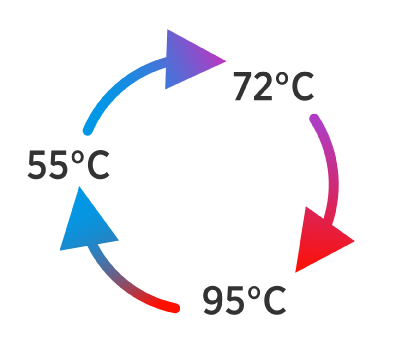 Determining the optimal melt temperature may require a trial run. This can be done with advanced PCR machines where four to six temperature zones can be controlled simultaneously from 50 to 65°C.

A pretrial test can be run to find the optimal temperature at which biomarkers will attach to the DNA. This can be monitored in real time at various zone temperatures to determine the optimal melt temperature prior to running a formal PCR test. This will assure highest accuracy in test results and is needed for quantitative PCR. 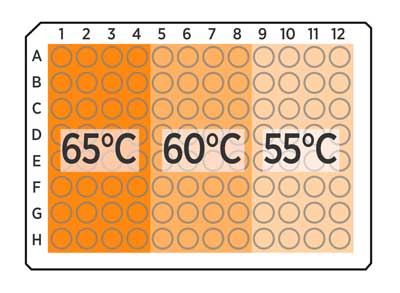 Temperature zones are used for pretrial tests to find the optimal melt temperature at which biomarkers will attach to the DNA.

To minimize the total duration of amplification and maximize the number of tests a PCR can conduct in a day faster temperature ramps rates are required. In traditional PCR machines ramp rates of 3-5°C per second are expected. With new machines coming to market ramp rates are increasing to 6-9°C per second.

The control side consists of a cold block with machined wells to accommodate a sample cartridge. One of the greatest challenges in this application is to minimize the temperature gradient across the tray so all wells are cycled to the same set point temperature. Sample trays in the thermocycler must be kept to within plus or minus a half a degree C throughout the PCR process or else they will be subject to errors and cannot be used for analysis. The heat rejection side consists of a heat sink and fan with a heater cartridge. Often a secondary control loop is used on the heat rejection side to keep the temperature of the hot side stable while the control side is fluctuating across a 40°C temperature differential. This improves the temperature control and helps minimize overshooting of temperature set points, especially under fast ramp rate conditions.

Thermocyclers can be used in PCR protocols where very strict temperature control is required. Maintaining temperature control to within +/- 0.5 degrees C can be challenging, particularly on the wells that are located on the outer edges of the tray. Lateral heat spreading and a highly thermally conductive cold plate is critical to assure minimal temperature gradient across the plate. 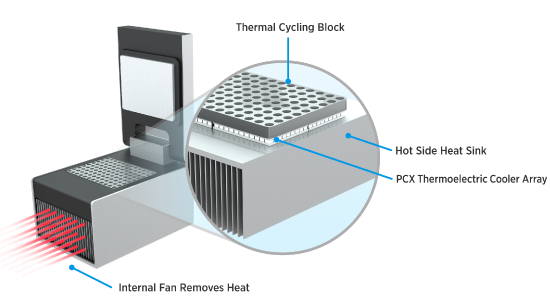 One PCR protocol example is heating tissue slides for in situ hybridization. The controlled temperature ramping provided by a thermocycler enables the study of temperature-dependent kinetics. In addition to optimizing a PCR protocol, a thermocycler with a gradient feature allows for the determination of the optimum temperature for any enzymatic activity.

Compared to traditional PCR thermocyclers which can take hours to deliver results, modern real-time PCR, offers results during the ongoing testing. This allows technicians to stop the test and adjust if an error has occurred. The increased speed of real-time PCR is largely due to reduced cycle times, removal of post-PCR detection procedures and the use of fluorogenic labels and sensitive methods of detecting their emissions. Real-time thermocyclers use advanced thermoelectric coolers because they offer more precise temperature control, a smaller footprint and higher efficiency compared to other technologies. By achieving faster temperature ramp rates, thermoelectric coolers provide greater throughput and faster test results.

Standard thermoelectric coolers are designed for refrigeration applications only. They have a solid construction consisting of solder joints between the copper buss bars on the ceramic substrates and semiconductor couples. Due to the rigid structure, thermal cycling exerts mechanical stresses onto the thermoelectric coolers as the module quickly contracts and expands from repeated cooling and heating cycles. The thermal contraction causes the cold side ceramic to shrink, while the hot side ceramic substrate expands. The semiconductor elements are soldered to both sides and experience a mechanical fatigue and shear stresses during cycling. This can cause a failure or significantly reduce the operational life of the thermoelectric cooler making the PCR machine inoperable.

Installed under the thermocycler trays (wells), to deliver precise temperature stability, the PowerCycling PCX Series is specifically designed to handle hundreds of thousands of thermal cycles with minimal degradation. The highly reliable PowerCycling PCX Series extends the mean time between failure (MTBF) of thermal cyclers to lower total cost of ownership by reducing downtime and maintenance. This will extend the operational life of the PCR device meaning that OEMs can maximize consumable sales for each machine.

When used in an array underneath a thermocycler tray, the PCX Series thermoelectric coolers optimize lateral heat spreading to offer precise, uniform temperature stability to within ±0.5°C across the entire cold block. Array sizes depend on the number of tray wells.

The PCX Series is offered in a wide range of cooling capacities ranging from 14 to 215 Watts that spans several geometric footprints to accommodate varying tray sizes and number of wells. 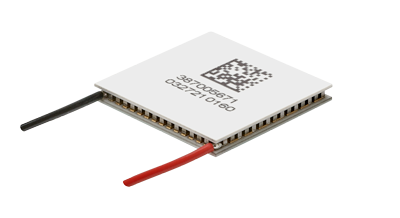 The PCX Series is designed to operate in temperatures up to 120°C, which exceeds the requirements for PCR applications. 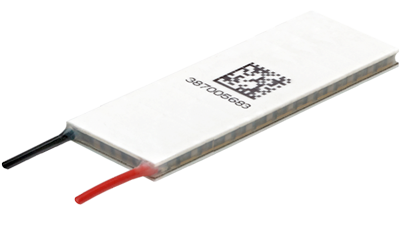 PCX Elongated Thermoelectric Coolers allow for more narrow temperature zones on the PCR tray, which makes it easier for technicians to find the optimal melt temperature. 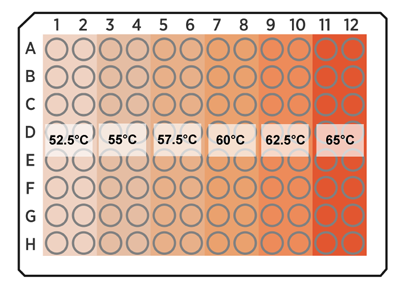 However, the manufacturing process of elongated thermoelectric coolers is extremely challenging due to the bowing effect that comes with elongated parts. The longer the length is to width, the more likely the ceramic tends to bow, which can be a challenge during assembly. 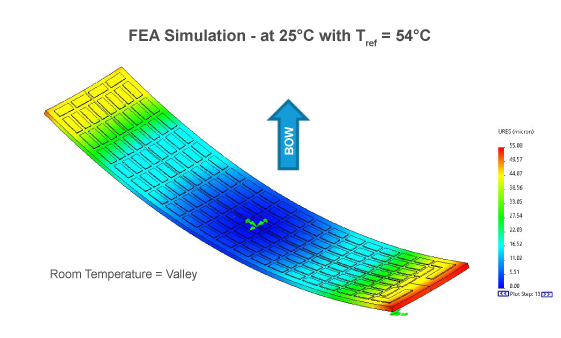 Elongated parts are challenging to manufacture due to the bowing effect that occurs at elevated temperatures. Our PowerCycling PCX Elongated Series offers a superior module construction that eliminates the impact of this effect.

The polymerase chain reaction (PCR) requires a high number of thermal cycle steps to create millions of strands of DNA sequencing for analysis. This is a harsh environment for standard thermoelectric coolers due to the mechanical stresses that occur during the heating and cooling stage. Laird Thermal Systems has developed a new PowerCycling PCX Series using next generation thermoelectric materials with a proprietary thermoelectric module construction to absorb the mechanical stresses and extend life of the thermoelectric cooler. This has been validated through rigorous cycle testing based on latest PCR qualification standards.

Go to the Thermal Wizard PCR Calculator to find the optimum thermoelectric cooler for your PCR application. 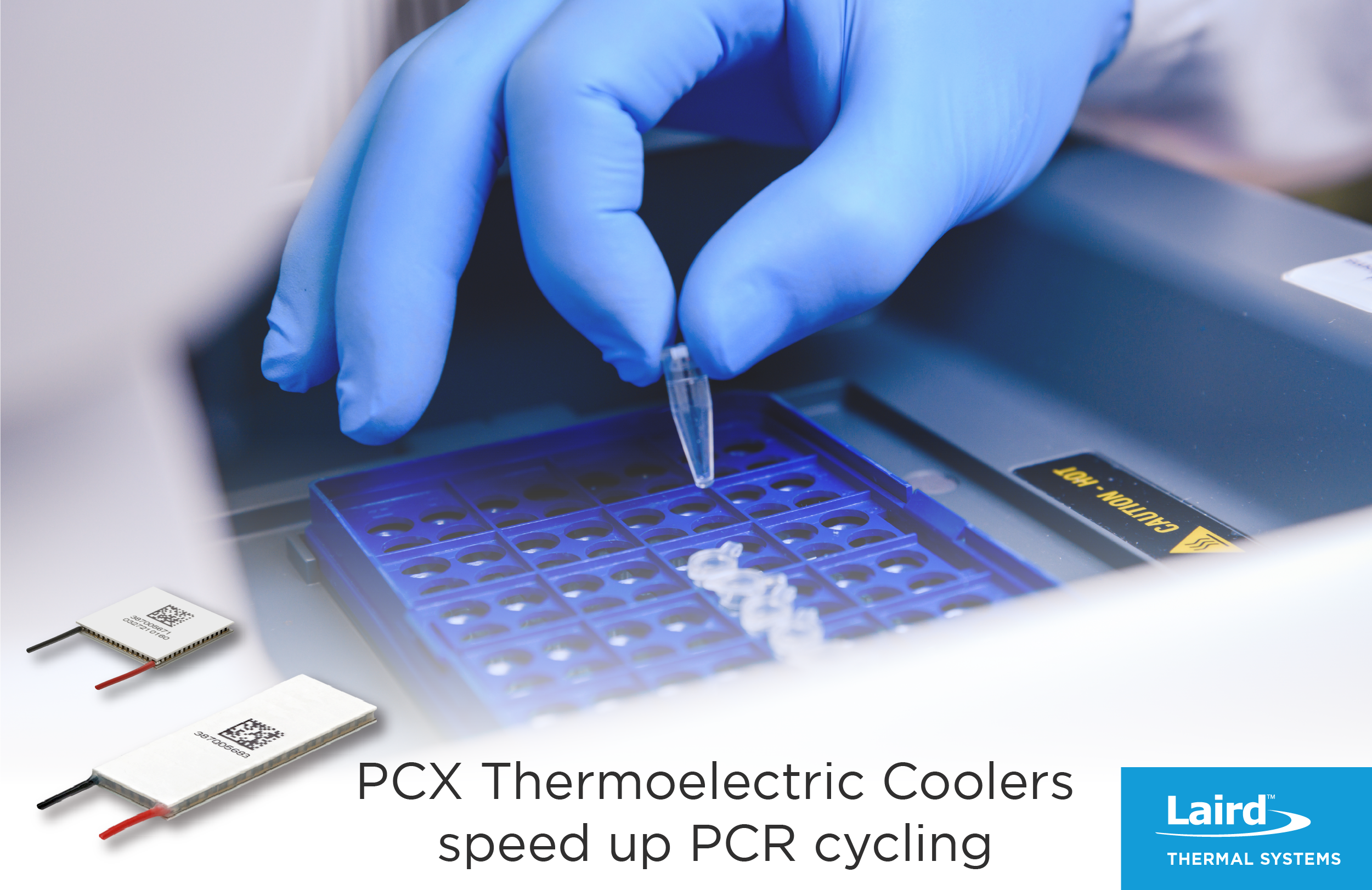