Medical lasers are designed for use in hospitals, outpatient surgical centers, and physician offices. They combine cutting, ablation, and coagulation properties for precise, virtually bloodless procedures; minimizing thermal damage to the surrounding tissue and increasing recovery time. They also sanitize the area through the heat of the laser, destroying any microbiological bodies that could lead to infection. Although medical lasers are valuable to many medical treatment applications, they do generate waste heat that affects the lasers performance when in operation. Manufacturers also face thermal management design challenges such as temperature stability, noise restrictions, space constraints, and reduced power consumption. 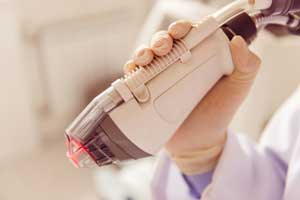 Medical lasers generate a large amount of heat that needs to be dissipated away from the sensitive laser components.

Lasers generate a significant amount of waste heat that can affect peak performance of the laser. Heat generated by the laser can range from as little as 5 Watts to more than 150 Watts depending on the medical laser application. For optimal performance, the laser requires a stable operating temperature of 20°C ± 0.5°C, while ambient temperature may fluctuate in room temperature environment.

The thermal stability is particularly challenging because of form factor restrictions of the medical laser. Miniaturization of handheld lasers has led engineers to pack more electronics into a smaller footprint. More electronics increases functionality, like combining skin cooling with skin treatment, however, it also increases the complexity of the thermal solution. As a result, the thermal components must provide advanced thermal control, sometimes with multiple cooling loops and route heat dissipation thru tight geometric space constraints. As this is a handheld device, components must also be able to withstand shock and vibration to ensure long-life operation. To further reduce operating costs, low maintenance thermal management solutions are preferred.

In addition to cooling the laser, the patient’s superficial layers of the skin are typically cooled to protect the epidermis and prevent thermal injury. Cooling can be achieved by cold contact cooling, blowing cold air or cryogen spray (dynamic) cooling. Contact cooling is considered the best method for cooling skin. More sophisticated laser systems feature an imbedded contact cooling device to reduce pain and erythema to increase patient comfort during the procedure.

Thermoelectric coolers are composed of two ceramic substrates that serve as electrically insulating materials and house P-type and N-type semiconductor elements. Heat is absorbed at the cold junction by electrons as they pass from a low-energy level in the P-type element onto a higher energy level in the N-type element. At the hot junction, energy is expelled to a thermal sink as electrons move from a high-energy element to a lower-energy element.

Reversing the polarity changes the direction of heat transfer. Thermoelectric coolers are rated at maximum parameters (ΔTmax, Imax, Vmax, and Qmax) under no load conditions, with temperature control accuracy achieving ±0.01°C under steady-state conditions. They can cool to -100°C (6-stage) and pump up to 15 watts per centimeter square of heat, with higher heat pumping capacities achieved by wiring thermoelectric coolers into an array. Their geometry can vary from 2x2 mm to 62x62 mm and are much more efficient in heating mode than resistant heaters. They also fit into tight geometric space constraints and can be mounted in any orientation that cannot accommodate a much larger compressor-based system. Thermoelectric coolers offer high reliability, no operational noises and perform well in high-vibration applications such as medical lasers.

Laird Thermal Systems’ Ceramic Plate (CP) Series is a rugged, compact thermoelectric cooler designed for higher current and large heat-pumping applications like handheld cosmetic lasers. Placed next to the laser, the CP Series direct-to-air configuration offers a maximum cooling power of up to 120 Watts with a temperature differential (ΔT) of 70°C in a small form factor of 62 mm x 62 mm x 4.6 mm or smaller. The CP Series is available in a wide range of heat pumping capacities, geometric shapes, and input power ranges to meet handheld laser requirements. 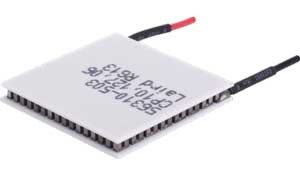 Laird Thermal Systems CP Series offers a cooling power of up to 120 Watts. 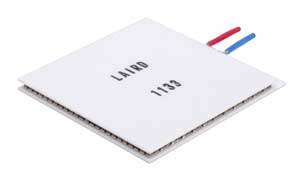 The SuperCool Series features a unique patented design that offers a high-performance hot side heat sink which dissipates heat more quickly and more efficiently than competing heat exchanger technologies, enhancing the cooling performance by up to 90%. The units operate on 24 VDC and are available in Air-to-Air, Direct-to-Air and Liquid-to-Air configurations with heat pumping capacities ranging from 110 to 407 Watts. Their smaller form factor design utilizes custom thermoelectric coolers to maximize cooling capacity and premium grade fans to minimize noise, while superior moisture-resistant insulation prevents condensation from penetrating into the chamber cavity.

The new SLA-400 SuperCool Thermoelectric Cooler Assembly offers the largest cooling capacity in the industry for its size. Liquid-to-Air units such as SLA-400 offer great flexibility because it can be mounted where space is available while cooling both the laser and the patient eliminating the need for separate cooling loops. This frees up space for other critical electronics resulting in a more compact medical laser system with maximum cooling capacity. 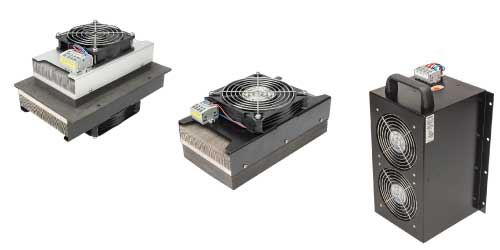 The SuperCool Series thermoelectric cooler assemblies ranges from 110 to 407 W and is offered in Air-to-Air, Direct-to-Air and Liquid-to-Air versions.

The PowerCool Series offers cooling capacities from 20 to 280 W. They are available in Air-to-Air and Direct-to-Air configurations that use impingement flow to dissipate heat on the hot side. The Air-to-Air assemblies cool objects via convection, where the heat is absorbed and dissipated by heat exchangers equipped with fans and ducted shrouds.

The PowerCool Series is offered in Air-to-Air and Direct-to-Air versions, ranging from 20 to 280 W.

The Tunnel Series uses a patented, high performance cross flow technology that maximizes heat transfer when pulling air through a heat exchanger. This cross-flow technology reduces the number of required airflow paths when compared to traditional impingement flow assemblies. The heat pumping action is generated by thermoelectric coolers, which are custom designed to achieve a high coefficient of performance to minimize power consumption. The smaller form factor Tunnel Series offers cooling capacities exceeding 100W to support a wide range of cooling applications. The Tunnel Series is offered in 12 or 24 VDC configurations and can cool by either convection (Air-to-Air) or conduction (Direct-to-Air) means.

The Tunnel Series thermoelectric cooler assemblies offers a cooling capacity from 10 to 100 Watts and is available in Air-to-Air and Direct-to-Air.

Thermoelectric coolers and assemblies are the preferred solution to temperature stabilize medical laser systems to maintain their peak performance. Through the Peltier effect, thermoelectric coolers deliver reliable solid-state operation with low maintenance requirements offering a low total cost of ownership. Thermoelectrics have compact form factors allowing them to accommodate the latest medical laser designs where space constraints can be an issue. They have enough cooling power to cool multiple components in a laser system simplifying the overall cooling solution. This cannot be accomplished by any other means without a complex heating and cooling system.

More information on the SuperCool Series can be found by visiting https://www.lairdthermal.com/products/product-series/supercool-series

More information on the PowerCool Series can be found at
https://www.lairdthermal.com/products/thermoelectric-cooler-assemblies/peltier-power-cool-series

More information on the Tunnel Series can be found at
https://www.lairdthermal.com/products/product-series/tunnel-series 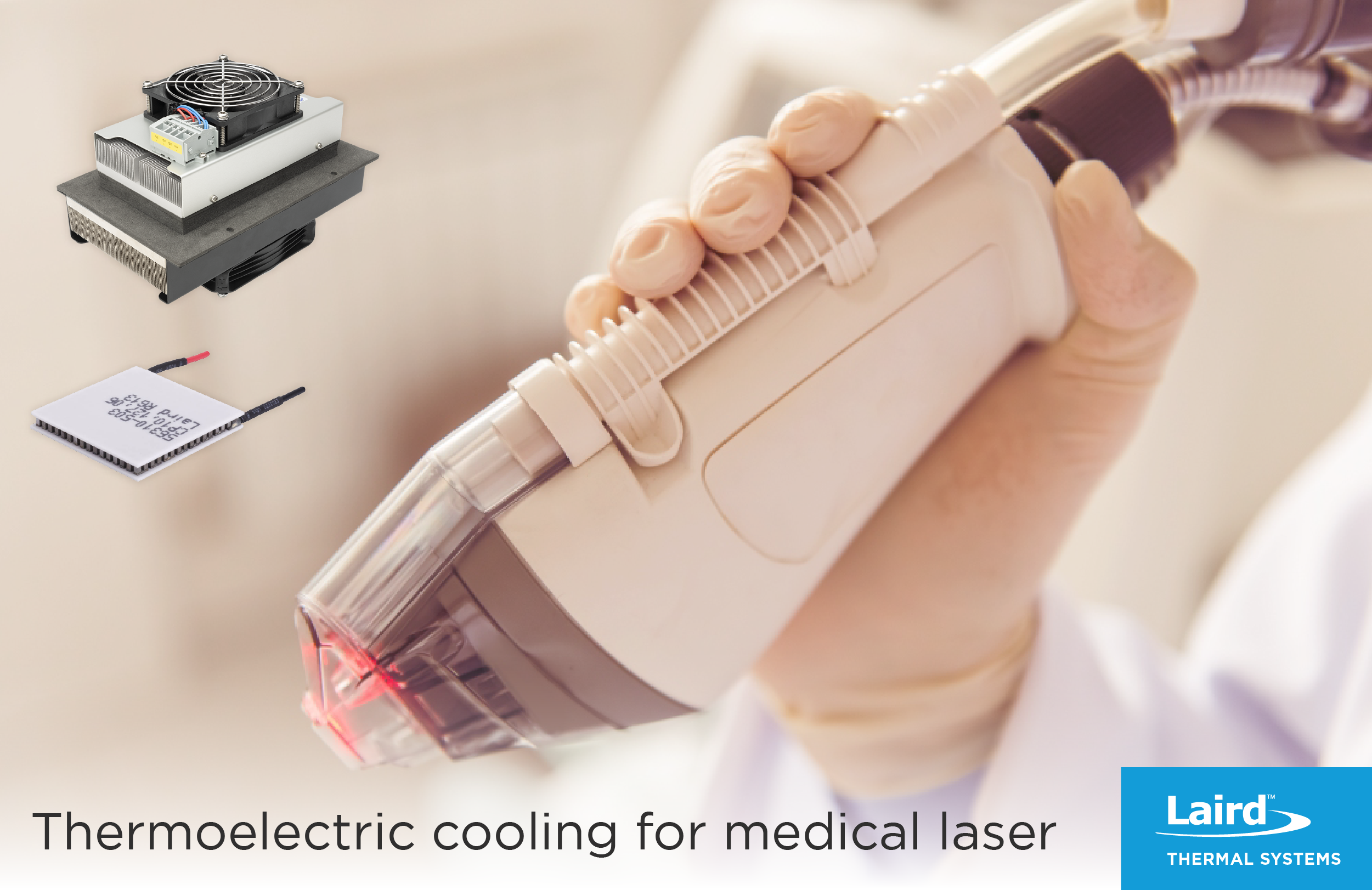