Used to source, detect, and control light, optoelectronics are increasingly important in a wide range of automotive, telecom, and industrial applications. With high beam quality and low energy consumption, optoelectronics offer superior performance at a low cost. Due to the potentially high-temperature environments in which these optoelectronic components operate, active thermoelectric coolers are used for temperature stabilization to ensure maximum performance and long-life operation.

The optoelectronics sector includes a number of applications across a swath of industries. Laser diodes and optical transceivers are among the more established technologies; laser diodes have been utilized in fiber optic communications, barcode readers, CD/DVD/Blu-ray disc reading/recording, laser scanning, and light beam illumination, while optical transceivers are key components in communications networks. Infrared Range (IR) sensors are found in applications such as temperature sensing, video surveillance and motion detection. They’re also used to test the quality of solder joints in manufacturing and to ensure even distribution of anti-icing spray on airplane wings during the winter. Most recently, infrared range sensors were used to detect people’s body temperatures as a security and safety measure in the fight against the COVID-19 pandemic. Finally, light detection and ranging (LiDAR) is a survey-mapping technology that uses light waves to detect objects in 3D by measuring the time it takes for laser pulses to bounce off objects at a distance. It is used for land management and planning including hazard assessment, forestry, agriculture, and geologic mapping and most recently in autonomous vehicle systems. 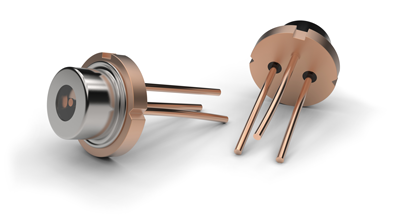 Despite these diverse applications, however, one fact is true for all: Temperature stabilization of the optics and associated electronics is vital for proper operation and performance.

Optoelectronics applications have a number of thermal requirements and challenges that designers must take into consideration during design.

Laser Diodes and Optical Transceivers
By converting electrical current into high-intensity light, laser diodes enable data transmission over significant distance in modern fiber-optic communication systems. They are also bundled together in industrial processing to form a high-power laser that can cut through materials and in LiDAR technology used to map the area surrounding an autonomous vehicle.

Whether used for fiber optics in telecommunications, industrial processing, or autonomous systems, temperature stabilization is critical in maintaining the diodes’ peak performance and ensuring long-life operation. Because laser diode package temperatures can reach +85°C in an outdoor environment, waste heat must be dissipated to keep the laser below its maximum operating temperature. If the temperature fluctuates, it impacts the laser’s wavelength. For every three degrees of temperature, wavelength can change up to one nanometer. In telecommunications applications, for example, operating at shorter blue and UV wavelengths allow more information to be stored on optical disks at a higher density. Temperature must remain stable to prevent loss of data and disrupted transmission.

Increased data transmission speeds with the new 5G telecommunication standard present significant thermal challenges for optical transceivers. To ensure high-performance data transmission and minimize information loss, the laser diode in transceivers must remain below +70°C. Due to their small form factor and limited access to airflow, transceivers require an active cooling solution to prevent the unit from exceeding its maximum operating temperature.

IR Sensors
An IR sensor in surveillance cameras, for example, sends out infrared light to measure radiation (heat) in the target object and converts it into a visual image. To obtain maximum image quality, IR sensors must be cooled to minimize thermal noise, which is the difference between the target object and its surrounding environment. The sensor must be kept at an operating temperature usually well below freezing, so the camera can capture a larger light spectrum and, therefore, produce a better-quality image. Thermal noise as a result of temperature instability will disrupt and distort the image quality. 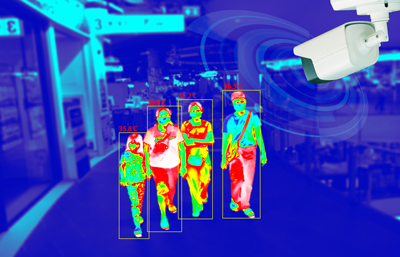 LiDAR/autonomous systems
LiDAR detects objects in 3D by measuring the time it takes for laser pulses to bounce off objects at a distance. LiDAR uses light waves similar to radar’s use of radio waves or sonar’s use of sound waves. The sensors in the LiDAR systems can read a million data points per second, enabling them to build high-quality 3D images of scanned objects or landscapes.
The lasers in LiDAR systems, particularly those used in outdoor autonomous applications, require active cooling to achieve maximum resolution in high-temperature environments. As temperatures increase, the wavelength of the laser changes, resulting in increased range error. Maintaining operational temperatures within a LiDAR system’s temperature limits ensures peak performance. 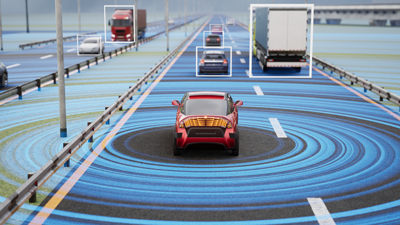 Despite these applications differences, they share some common design challenges.

The devices and equipment used in these applications are housed in increasingly smaller packages. Cooling solutions for laser diodes, IR sensors, and optical transceivers in optoelectronics devices also must shrink to fit into a 6x8 mm or similar footprint. These small components require precision handling during material preparation, pick-n-place, and solder control.

Additionally, while standard-sized parts can use thermal grease as under-surface material, the smaller components in these applications must be soldered to the casing before being dropped into the optoelectronic package. Thermal grease can cause outgassing in the vacuum seal of a laser diode and coat optical components. For this same reason, the components’ lead wires oftentimes are bare. Components must be relatively clean to ensure the imaging sensors, laser diodes, or optical transceivers remain uncontaminated.

Temperature stabilization is a key issue in these applications. For example, the typical operating temperature range for a commercial optical transceiver is 0°C to 70°C, with high-end transceivers operating up to 85°C. Housed in an 85°C environment, then cooled to 25°C, the device will almost reach maximum performance at a 60°C temperature differential with minimal heat pumping capability. While these applications need cooling, the heat removal required must be done efficiently thru low thermal resistance heat conduction paths.

Finally, the required cooling solution serves a specialized niche set of applications; the cooling solution should be optimized specifically for these environments, by a manufacturer who is an expert in the market.

Active thermoelectric devices such as thermoelectric coolers are used in conjunction with passive heat sinks to offer spot cooling and rapidly move heat away from sensitive optoelectronics. Thermoelectric coolers can create a temperature differential across the module, which lowers the temperature differential of the critical device by as much as ~60°C from hot side. Heat will then need to be routed thru a heat rejection mechanism, such as a thermally conductive optoelectronic package, to get the heat transferred into the air or another conduction path. 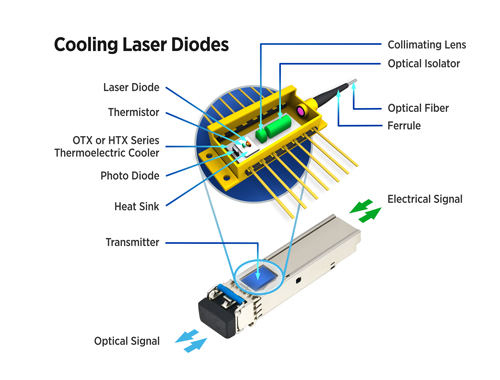 The OptoTEC OTX/HTX series is available in multiple configurations and surface-finishing options. It combines a small geometric footprint of less than 4x5 mm with reliable and efficient heat pumping capacity. Assembled with bismuth telluride semiconductor material and thermally conductive aluminum oxide ceramics, the OptoTEC Series is provided with 57mm un-insulated wire leads and is designed for lower current and lower heat-pumping applications. 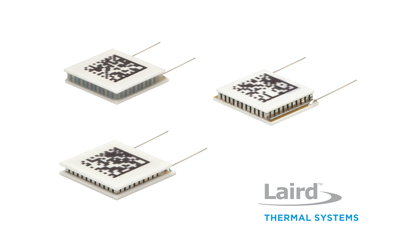 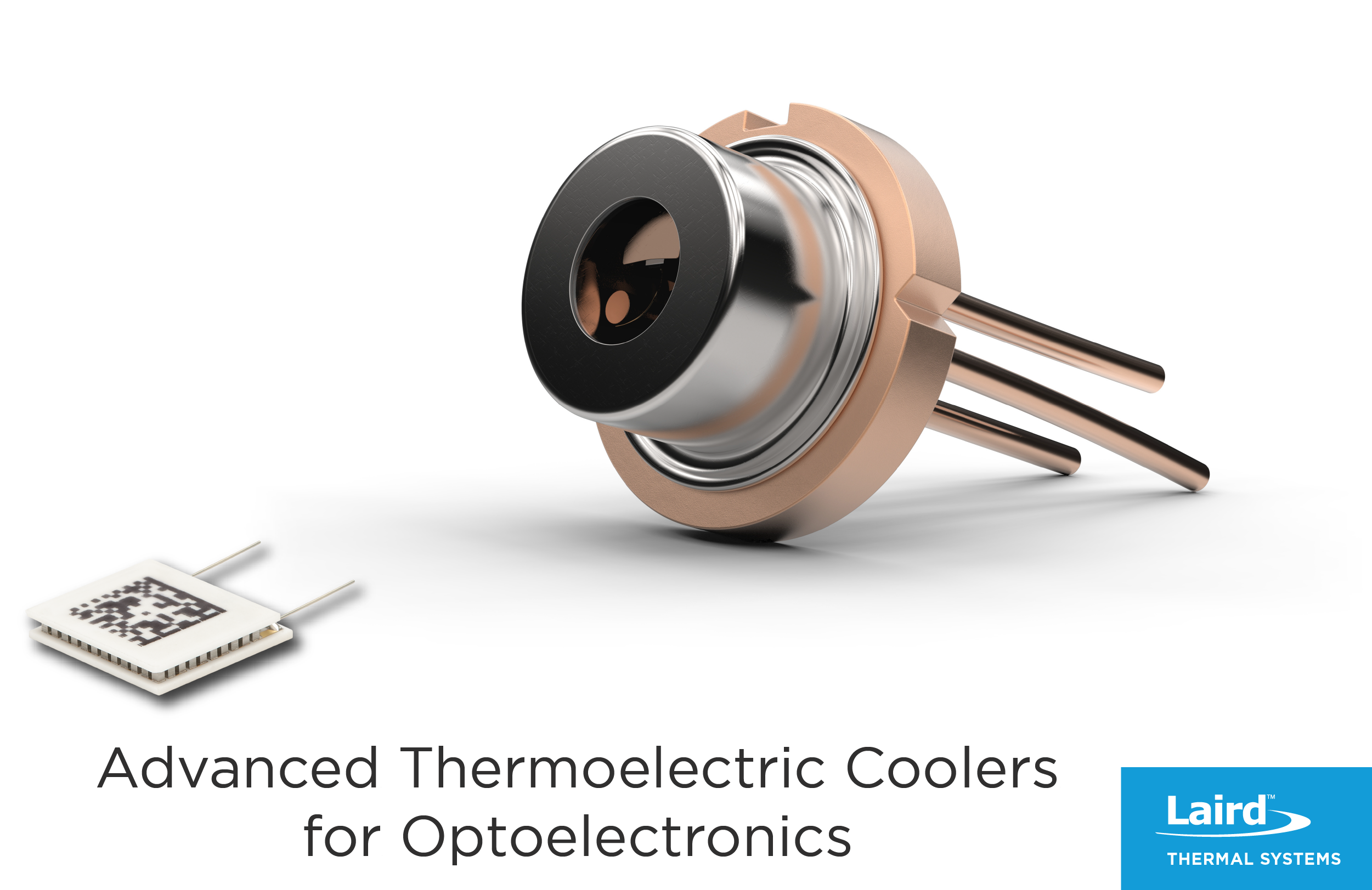