High-performance liquid chromatography (HPLC) is a technique used for analysis of liquid mixtures by separating, identifying, and quantifying their constituent components. Liquid chromatography normally operates with smaller amounts of material and seeks to measure the relative proportions of analytes in a mixture. R&D laboratories in the pharmaceutical, food science and oil industries use these instruments for product development or reverse engineering.

Temperature control plays a major role in the liquid chromatography separation process by influencing the interactions taking place between the sample components and adsorbent. Modern HPLC instruments utilize thermoelectric Peltier technology in order to cool or heat the sample tray and separation column. Laird Thermal Systems’ complete thermal management systems optimize liquid chromatography equipment capabilities. Depending on the heat load capacity requirements of the HPLC system, these can be either thermoelectric coolers or thermoelectric assemblies in combination with our SR-54 Series temperature controller. 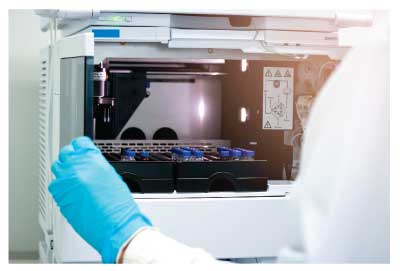 Capacity
Even though thermoelectrics are used for both heating and cooling in HPLC equipment, cooling is much more difficult to achieve. When power is reversed to a thermoelectric, the direction of heat transfer reverses, so heat is absorbed from the surrounding environment and added to the resistive heat generated by the thermoelectric cooler. This results in heating efficiencies being several times greater than in cooling mode.

To achieve maximum performance of thermoelectrics, the temperature differential must be accurately calculated to determine how much heat transfer is required. Thermoelectric cooler assemblies generally have a maximum heat pumping capacity rating, which goes down as the temperature differential increases. This rating is similar to air or fluid flow capacity for fan or pumps but the figure can only be achieved under no system impedance.

For a thermoelectric Air-to-Air unit, the hot side temperature is typically defined as the air that heat is being channeled into, which means that the pumping capacity for a standard thermoelectric cooler assembly with a published performance chart is relatively simple to calculate. For an individual thermoelectric, however, the true hot side temperature is not as readily apparent, being dependent on both the amount of heat being moved and the thermal resistance between the thermoelectric hot side and the ambient air. Because of this, the single most critical component of a thermolectric cooler assembly in terms of performane is the hot side heat sink. Because of the added flow from resistive electrical heat generated in the thermoelectric, more heat is transferred across it than across the cold side sink. A 2-3˚C difference in heat sink performance corresponds to a roughly 5% change in the amount of heat pumping capacity.

Because space is usually a major constraint, paths for incoming and exhaust air must be considered. For cooling of heat sinks, impingement airflow is generally recommended. This is where fans direct air onto the heatsink perpendicular to its baseplate. However, this requires multiple airflow paths, which may not be available in a tight geometry constraint. Another option is to push air along the fin direction, parallel to the heat sink base. However this results in lower performance due to continuous laminar flow with little turbulence at low velocity points. A third possibility is running the airflow normal to the baseplate as in impingement, but have the airmover pulling air away from the base. This is not as desirable as directly flow into the base, as there can be a steady “dead-zone” of low air movement directly under the fan. However, system considerations, such as the need to direct the warmed up heat sink exhaust air away from the tray or electronics, may require such a direction.

For faster response time, the fan can be continuously powered at nominal voltage even between moments when the thermoelectric is unpowered. If the thermoelectric has significant over-capacity and will spend much of its duty cycle unpowered, it may be beneficial to turn off the fan at those moments and extend the system operating life. The air mover is typically the item with the lowest overall lifetime in a thermoelectric cooler assembly.

Sealing feed passages for power and sensor wiring is also critical. These can be either holes in gasketing or foam or through the solid base heat sink or cold block. In both cases, silicone-type sealant is typically used, though when passing through metal, an appropriate wire sealing grommet is prefered.

Depending on the temperature control requirements, different design features may be necessary. Precise temperature control ranging from 4 to 40 °C is typically required with heat load requirements ranging from 25 to ~100 Watts. Some new instruments require up to 200 W that accommodate large sample testing throughput. In addition, many new HPLC instruments feature multiple sample storage chambers that have different cooling or heating requirements, increasing the overall system heat load.

Temperature sensing could be installed into the thermoelectric cooler assembly cold plate or nearby. If possible, it is prefered to have the sensing location close to the samples. If the application require temperature stability of more than 1˚C, a temperature controller will be useful. However, if only cooling is needed and the system allows a few degrees hysteresis, thermostatic control will be sufficient. If both heat and cooling are needed, better temperature sensors and some basic PID control logic will be required.

There are many advantages of using thermoelectrics in HPLC systems, including the ability to both heat or cool with rapid ramp rates. They also provide precise temperature control and are environmentally friendly because they do not use any harmful refrigerants.

The illustration below shows how a typical thermoelectric heater/cooler assembly is used to cool or heat a liquid chromatography instrument. The thermoelectric device is mounted between two air heat exchangers. In cooling mode, air inside the chamber moves across the cold side air heat sink and gets cold. The heat is absorbed by the thermoelectric coolers and transferred to the hot side heat sink. The hot side heat exchanger then dissipates this heat into the air’s ambient environment. In heating mode, the opposite occurs. The hot side fan is typically off in heating mode to limit heat transfer from the ambient environment. 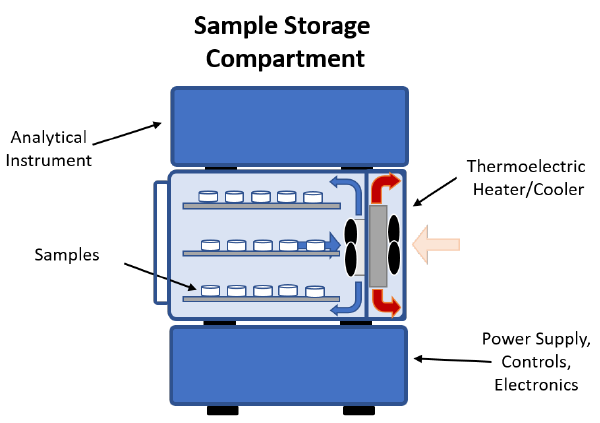 The Tunnel Series thermoelectric cooler assemblies offers a cooling capacity from 10 to 100 Watts.

The PowerCool Series Thermoelectric Cooler Assemblies range from 20 to 280 W. 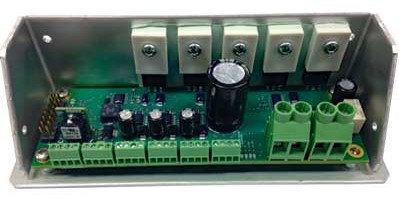 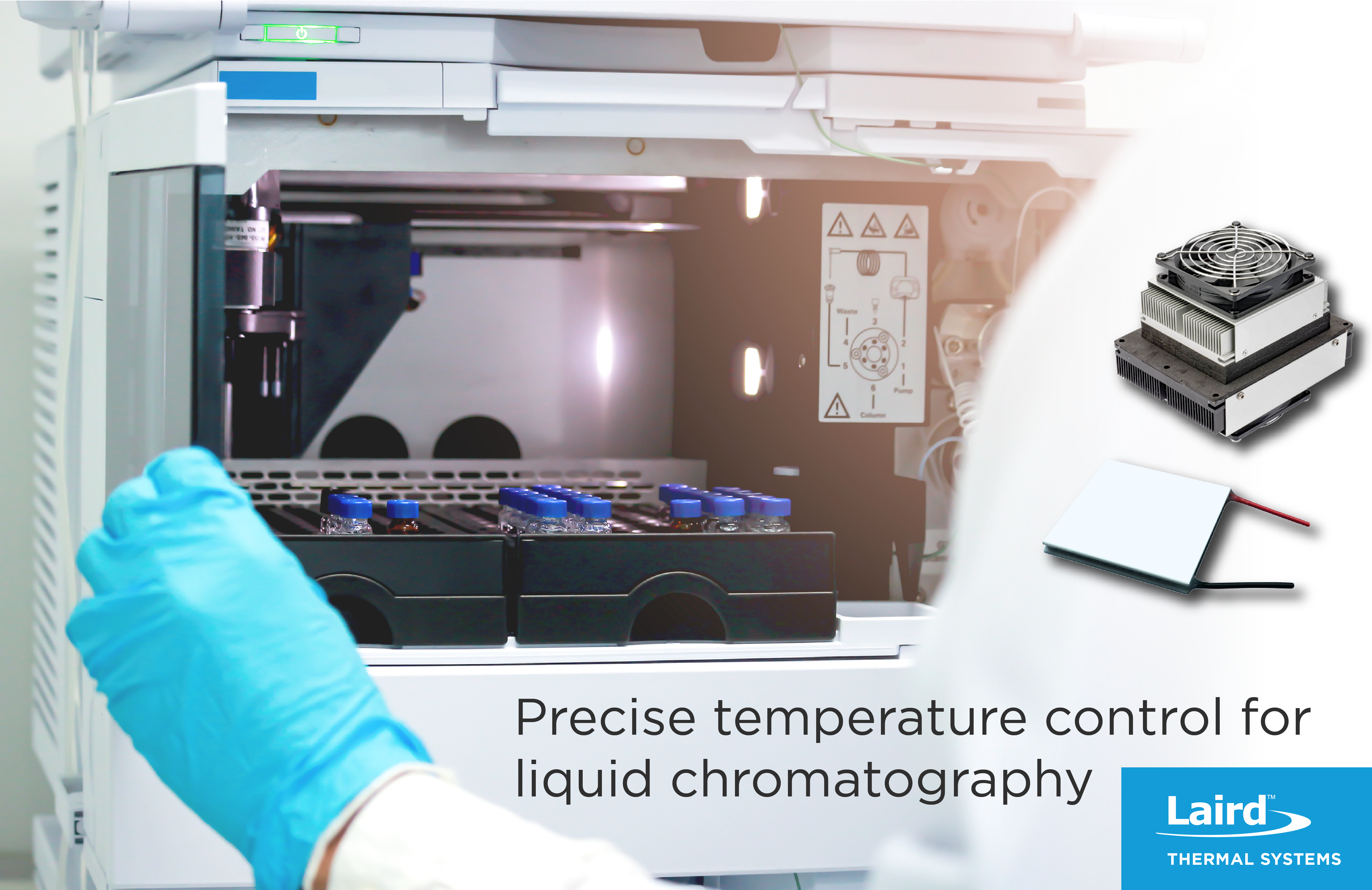